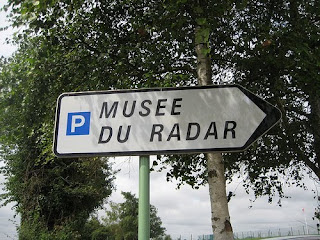 From 05/08/2009-27/08/2009 5 French, 5 German and 5 British volunteers came together to work on a very special project which is very close to the D-Day landing beaches of Northern Normandy in France. As Concordia UK sent volunteers to this project Fiona Callender went to visit this fascinating project.

For over 60 years Concordia France, Concordia UK and IJGD Germany have been committed to international volunteering. In fact the very first recorded exchange of volunteers was back in 1919 where the first workcamp in Verdun, France was held. Ex soldiers from France and Germany met to rebuild the battleground area and the workcamp movement was born. So in 2009, which is the 60th anniversary of Concordia France, it seemed appropriate to bring volunteers together to work on a project in this historically significant part of France.

Douvres la Delivrande is a sleepy village which is about 2 km from the beautiful beaches of Normandy and around 14km from the historical port of Caen. If you walk through the village now you it’s hard to imagine that over 60 years ago things were very different and in a field just outside the village, one of the biggest German war secrets was taking place. In 1942 the biggest radar station, known as the ‘German Atlantic wall’ was built. It linked most of the French coast to a radar detection network. At its peak the 35 hectare radar station had 258 people working on its site of 30 bunkers. The radars were very effective in detecting British and American aeroplanes and were responsible for shooting down many planes. It wasn’t until mid 1944 that the radar station was finally taken by Canadian and British troops.

The Radar Museum was opened on 31st May 1994 where 2 of the bunkers have been turned into a museum. The work for our volunteers was to clear 2 of the unused bunkers that have not been touched for 64 years.

Most of the work involved clearing vegetation and on the day I visited it looked a daunting task to clear mature vegetation away from the bunkers. The museum had a steady flow of visitors whilst I was visiting and I was impressed to see how well recorded the events had been on this fascinating site. I spoke with a few of the volunteers and asked them why they were volunteering on this project.

Liz Game, a student from Warwick University who is studying History and French, told me that as well as improving her French she joined the project because she really wanted to bring her interest in history ‘to life’. She was very inspired by the work she was doing and felt great pride to be part of a team who was undertaking restoration from the 2nd world war. As part of Liz’s degree she had to stay in France for a month of her holidays, so she felt this was a great way to doing something positive with her time that would not cost her a fortune. She was also going to get her Duke of Edinburgh Residential gold award through her time on this project (another UK volunteer, Sophie was also using this project to gain her Gold award). 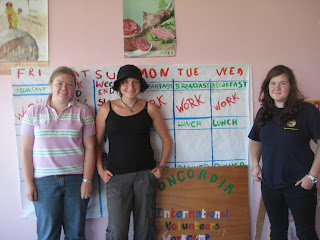 Anna Bentele is from Stuttgart in Germany and was part of the German team of volunteers. Her main motivation for coming on this project was to improve her English and French and to meet new people.

A French volunteer Assa Doucoure who is from Vitny Son Seime in the South of France had free time over the summer and wanted to meet new people and thought that the work was really worthwhile.

Concordia France had 3 great leaders; Thibquit, Caroline and Alice. All three spoke great English and had between them a wealth of experience for leading volunteers. Thibquit was the technical advisor and worked with the volunteers on the practical work where as Caroline and Alice were in charge of logistics. 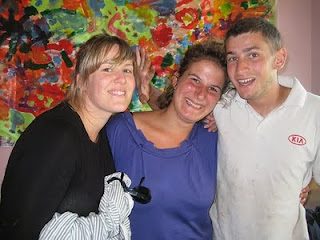 The leaders of the project

The group were staying in a local primary school which was about 2km from the Radar museum. We were invited for lunch which was, as always a great feast.

My lasting impressions of this project where one of solidarity, friendship and the commitment to respect and keep history alive. Whilst I was walking around the radar museum site I watched 4 flags blowing in the wind, a British, French, Canadian and German flag. It wasn’t until later I was told of the huge symbolism of these flags; it was the first time ever a German flag had been flown at this site and was a major step forward in terms of building peace. The decision to fly the German flag was not taken lightly and it was by Concordia France’s enthusiasm for this project that helped convince the local town mayor to make the decision to allow the German Flag to be raised at this site. It just goes to show how important international volunteering really is! 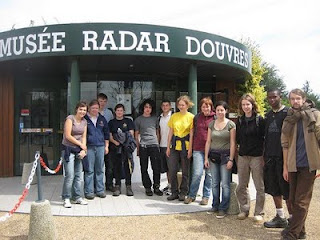 The group outside the museum 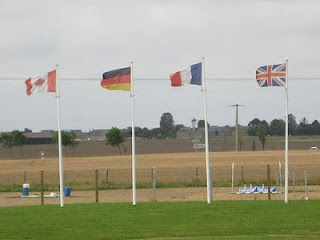 click here for pictures of projects in france
click here for a country profile of france
Posted by Concordia Volunteers at 3:39 PM No comments: