Joana lead a group of international volunteers on the last shift of our project at Manjushri Kadampa Meditation Centre at the end of summer 2017. Volunteers' work supported the day to day running of the centre and had the chance to learn a lot about meditation and Buddhism. Thank you Joana for your great article and we are glad you had such a great experience and learnt so much from it!

Being a coordinator on one of Concordia's summer project was one of the most rewarding experience of my life. At first I was really worried about not being able to make this experience the best possible for the volunteers, indeed having all those responsibilities in terms of social activities and group bonding was a first for me, however the volunteers made it quite easy. The main problem I encountered was probably trying to be firm and cool at the same time, acting like a “mum” and a friend at the same time.

The greatest lesson I learned from this experience was putting other people's interests (mainly volunteers) before my own, as a coordinator I thought it was my role to make everyone feel comfortable and as satisfied as possible from the various activities. However, as a human being I wasn't always agreeing with what the volunteers were keen on doing; it was really uplifting to put myself second for the best of a group, as it is something I was not too used to do (but I really enjoyed it and it taught me so many things about myself). Within the group as well, many differing views were expressed in terms of social activities, being the coordinator taught me a lot about doing compromises and taking responsibilities to please everyone whatever was decided. For instance, when we went on a day trip to the Lake District, the physical abilities of all the volunteers were quite different in terms of hiking, but by talking to each of them separately and then as a group we managed together to make a plan for the day that pleased everyone.
I believe the experience of coordinating a project in the UK made me more confident about a lot of different things; I now know how to make all the voices in a group heard, I've learned how to communicate well with two different parties (in this case the host and the volunteers) to prevent any issues from happening and avoid further conflict when an issue is already here.

For the future, I will definitively be using those leadership skills, communication skills and of course the kindness and understanding the Manjushri Kadampa Meditation Centre taught me. I would really recommend to anyone, from any background and any personality to try being a coordinator as I think we all have so much to learn from volunteers and hosting organisations.


Are you interested in becoming a Group Coordinator for Concordia? Read here about how to apply.

Posted by Concordia Volunteers at 3:58 PM No comments:

A Group Coordinator's Story: Coordinating an Eco Festival project in the UK

Here is the story from our of our Group Coordinators, Alex, who lead an international group of volunteers at an Eco-Festival project in Worcestershire during summer 2017, especially helping with the set up of the site before the festival started.

After I came returned to the UK, from an amazing long term volunteering project in Romania through Concordia, I had a meeting with the Concordia team to discuss the experience and settling back in. Soon, the conversation turned to the future; “What’s your plans for the summer?” (or something to that effect). Bored of my small room in a busy flat and full of wholesome memories of my Balkan travels, I gladly said “I’m down for anything!” (or something to that effect).
Before I knew it, I was heading to the Concordia office for a coordinator training course, where I’d meet a bunch of like-minded volunteer types. We discussed everything that we might encounter as a UK coordinator, if and when we ever coordinated other volunteers. The handy information we were given had strategies for dealing with matters like group cooking to conflict resolution, the latter transpired to be more applicable than the former.
Inspired and intrigued I came away with many new ways to take two weeks off work and volunteer instead. I could have stayed at Buddhist sanctuary, worked with deserving young carers or taken part in a music festival! Instead I was bound for two weeks camping in a muddy field eating vegan food – not my grandparents’ idea of a good break. Nevertheless, I was looking forward to working with ‘Green and Away’, an eco-friendly and creative events venue.
My first notable encounter of Green and Away hospitality came when one of the Concordia volunteers missed their connection and was going to arrive in the middle of the night. Although it was only my responsibility to ensure the Concordia volunteers were settled into camp, half the other volunteers at Green and Away stayed up with me to welcome the lonely traveller in with a cheer and a hug! It was very warming and I knew I would I be with good company for the duration of the stay.
As the long hot days went on we could see the camp growing and taking shape. Structures were being built every day and the muddy field was transformed into a homely venue. We could see the fruits of our labour. Everyone had their jobs to do, which was increasingly difficult in +30oC heat, but we had plenty of water and support. In the midday sun we would swim in the stream and cool off, it really put you in touch with your senses and with nature. Later in the evenings we would sit around the campfire or snuggle up in the Mongolian yurt and get to know each other. It was a satisfying, social and wholesome lifestyle.

We would get days off allocated during the week, so there was the opportunity to head into town and relax. The Concordia volunteers and I went for a day in Worcester, where I treated them to a full English Breakfast. Despite having a vegetarian among us, everyone enjoyed their meal (the café offered a veggie full English). This was their first encounter with a British classic, since they all came from different countries. It’s nice to know I could offer a cultural experience as well as a tasty one.

Once all the physically hard work was done and our beautiful camp was ready for guests. This is when the dynamic on camp changes from being practical and resourceful to being hospitable and service driven. The guests were always lovely and everyone on camp bands together to help each other out. 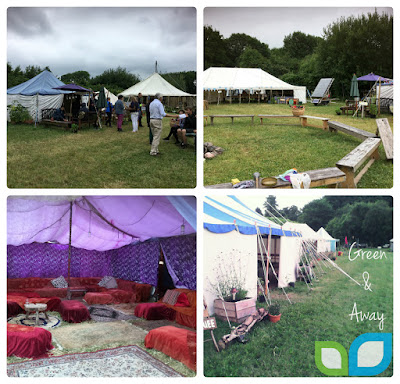 Sadly, all good things must come to an end. After being so absorbed in the atmosphere of Green and Away I had to don my coordinator hat once more. Gathering the other volunteers feedback was great, because I got to hear that they had a magical time too. This project was very comfortable from a coordinator perspective. Although, I think the role was useful, the accommodation, food and task allocation was excellently handled by the Green and Away team, so my job was to keep everyone happy and having the best time possible.

Despite having to resolve an issue between Green and Away and one of the volunteers after I got home, which was later resolved, I had such an amazing time. Green and Away is a special place where you can forget time passing and enjoy eco-living. They a strong sense of community which is welcoming and supportive. The work is hard and can be physically challenging, but it certainly pays off. I’m proud to have been a part of Green and Away and to have helped spread the message of sustainable development while personally having a lot of fun.

Alex Kimber, Group Coordinator at Green and Away Set Up, Summer 2017

Are you interested in becoming a Group Coordinator for Concordia? Read here about how to apply.

Posted by Concordia Volunteers at 3:35 PM No comments:

A volunteer story: Coordinating a festival project in UK and teaching English in Spain - summer 2016

Here is an article from one of our most committed volunteers, Barney Smith, who's been supporting Concordia for many years by joining projects overseas, promoting our work, co-ordinating projects in the UK and offering us his Blogs and reports every year. We would really like to thank Barney for all his support!

Here we would like to propose today one of his BLOGs written in 2016. 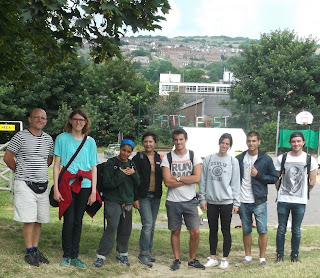 This summer of contrasts started on the English south coast in the busy tourist season and ended in the tranquil olive groves of Andalucia.

My twenty-fourth international volunteer project (my third as coordinator) was at Patchfest in Brighton, a community festival project which I had also coordinated 2 years earlier. My group consisted of Julien from France, Fabienne from Germany, Eduardo and Martina from Italy, Esther from Netherlands, and Leena and Marti from Spain. Our work involved setting up and taking down the equipment for Patchfest, and helping on the day with the running of the event, including stewarding, selling food and drink, washing-up and recycling. The festival is a source of pride for the local community and provides a platform for entertainment from local music talent. As in 2014, we were blessed with glorious weather. Our leisure activities included touring the sights of Brighton and walking under the cliffs near Brighton Marina, after which we found time for the quintessential English meal: fish and chips. 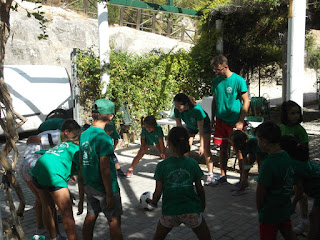 After a night’s camping near Brighton Marina, an overnight coach journey to the south of Spain, and a week’s Spanish course in Granada, it was time for my twenty-fifth international volunteer project – in the town of Jódar. In addition to our group leaders Rubén from Spain and Robbie from Ireland, the other volunteers were Jack and Nancy from China, Nikol from the Czech Republic, Christine and Sara from Denmark, Elena from Greece, Leonardo and Silvia from Italy, Mihailo and Sofia from Serbia, Nikolas from Slovakia, Jane from South Korea, and Can and Ozan from Turkey. Our work involved teaching English to the students by means of games and other fun activities. This gave me an opportunity not only to use my experience as a teacher but also to develop my skills and imagination in developing students’ linguistic skills outside a classroom setting. In our free time there were trips to Cazorla, Úbeda and Baeza, as well as hiking in the mountains, and almost daily swimming in the town’s outdoor pool, as we sought to cool off from temperatures reaching 40 degrees Celsius.

As I reflect on my summer of volunteering I would like to thank the people who made it possible: especially Suzi and her colleagues at Concordia; Duncan, our host at Patchfest; our Spanish hosts and the people of Jódar for making us feel so welcome; and all my fellow volunteers on both projects.

Posted by Concordia Volunteers at 11:03 AM No comments: