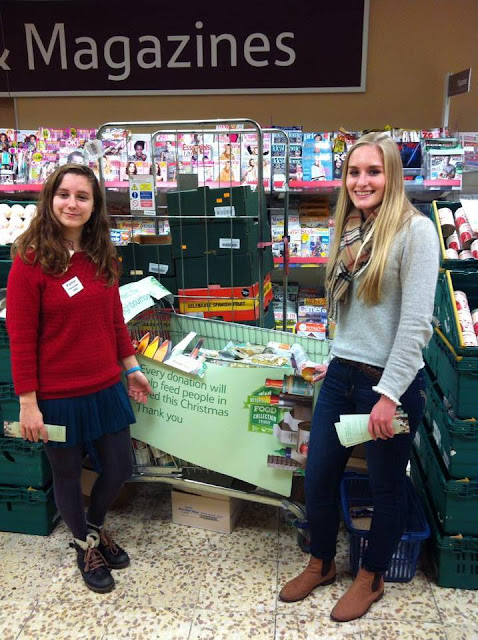 Naomi, one of our summer graduates, spent her evening on the 3rd of December volunteering for FareShare. Together with other volunteers, they placed themselves as Tescos up Boundary Road to raise awareness and collect food gifts, that later are to be redistributed to other charities, providing meals for people that can afford it.

The result? Two large trolleys ready to help people in need.
Posted by Concordia Volunteers at 12:14 PM No comments:

Stereotypes; What’s In A Country? 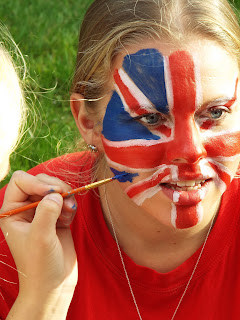 I imagine hell like this: Italian punctuality, German humour and English wine. On the surface this is quite a funny joke, but look a little deeper and you will see it is actually saying something very important about the expectations we derive from cultural stereotypes. While living in the UK I had many British friends. Some of them were punctual, some of them were always late, some of them were funny, and some of them more dry and serious (although of course I never drank English wine), but I never thought anything of it. It would be very dull indeed if everyone was overly polite all the time, played cricket, drank beer, loved the Queen and read a lot of Shakespeare. It was these differences in my friend’s personalities which made the rich tapestry of life so interesting and exciting. We were all British, but we were all different.

This all changes once you move abroad and you are suddenly forced into being an ambassador of your home country. Everything that you do is now measured by how well you comply or not to the expected behaviour of people from your country.   While living in Britain, if I had a British friend who was late, they were just late. However, abroad, an Italian person is expected to be late, and when they are, everyone is secretly slightly happy that their preconceived judgments of Italian people have been confirmed and reinforced. On the other hand, when a German person is late, they have failed at being German. Everyone is secretly outraged that they are forced to question if their preconceived judgments of German people are actually fair and accurate. The poor German in question is expected to fix their problem with tardiness as soon as possible, so everyone can go back to happily (and wrongly) believing that all Germans are punctual. Douglas Adams explores exactly this in his book Last Chance to See.

“If they [Helmut and Kurt] were going to be like that, then I just wished they hadn’t actually been German. It was too easy. Too obvious. It was like coming across an Irishman who actually was stupid… [or] an American businessman who actually did have a middle initial and smoked a cigar. You feel as if you are unwillingly performing in a music-hall sketch… If Helmut and Kurt had been Brazilian or Chinese or Latvian or anything else at all, they could then have behaved in exactly the same way and it would have been surprising and intriguing.”

When living abroad, and mixing in international circles, we are no longer allowed our own identities. We have the stereotypes of the identities of people from our home countries forced upon us, and we are expected to perform this role faithfully, however cliché or unnatural this may be. 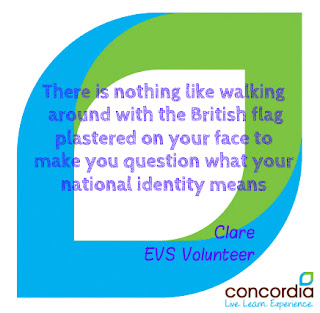 On my project here, there are also three people from Germany, two from Estonia (but of a Russian minority) one from Denmark, and one other from England. This Friday we were asked to paint our faces with the flags of our home countries, and to take pictures. While this was great fun, there is nothing like walking around with the British flag plastered on your face to make you question what your national identity means. This is a question not only of what your own personal identity means to you, but also of how the world identifies you. We are surprised if a German volunteer makes a funny joke, and we were outraged when the other English volunteer revealed that she doesn’t like tea. But none of this should be surprising. We are all just individual people, who happen to have been born in one country or another. Yet this is often where the similarity ends. Within this country we have all had very different upbringings and life experiences from the several millions of other people who happen to have been born in the same country as us, and we all have very different personalities and ways of life. While living abroad, and especially while participating in a European project, we are all in some way ambassadors for our home countries, this is inescapable. But it should also be remembered that we are all just individuals, living our individual lives, and should in no way be held accountable to, or responsible for, other peoples prejudiced and preconceived judgments of how people from our countries should act. Italians can be punctual, Germans can be late or funny, I have even found perfectly drinkable English wine and none of this should be in any way surprising.

Instead of being presented with stereotypes by age, sex, colour, class or religion, children must have the opportunity to learn that within each range, some people are loathsome and some are delightful. – Margaret Mead

Posted by Concordia Volunteers at 10:58 AM No comments: 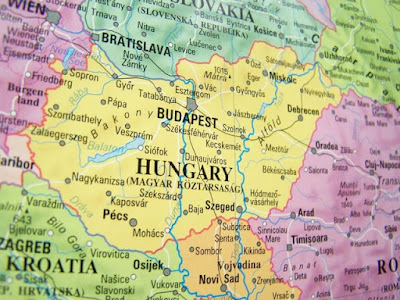 The project was based in a small village in the South of Hungary, 12 km from the border with Croatia. With 4 other volunteers from Spain, Portugal and Romania, we worked on several community development, sustainability and environmental projects including a large youth exchange about cycling with 66 young people from 12 different European countries involved.

I held free English lessons on a weekly basis, and also organised cultural evenings for the local people to try food and learn about British/Indian culture. We also held frequent cycling trips around the area and longer ones to Croatia to promote cycling as a great mode of transport, even in the winter! This was definitely my favourite part of the EVS, cycling in a rural area is a breath of fresh air when compared to navigating the concrete mess of London. We had a huge amount of freedom in exploring the local area by bike and meeting people, and it was a great way to gain an insight into Hungarian culture as a lot of people in the area also used bikes. We were also required to participate in Hungarian lessons and I am proud to be able to hold a basic conversation in Hungarian (one of the hardest languages to learn!), and we also learn traditional Hungarian dance lessons.

Working in the local nursery was very challenging due to the language barrier, but it was a lot of fun and once again, an insight into Hungarian life. We also ran projects in high schools to do with sustainability and development and it was an excellent chance to practice our Hungarian. Over the first few months, we learnt about analog photography and used our acquired skills to take and develop photos, as well as holding exhibitions for local people. We were able to use this later during the youth exchange where one activity involved bike-related analog photography. In terms of accommodation, for the first four months, we all lived in a house in the village with a big garden. We had to chop wood to heat the house by furnace, which felt like a true rural living experience to me. Over the spring/summer months we moved to a container in the field where our office was based (our office was also a container). It was incredibly hot in there but luckily we could jump in the freezing outdoor showers if it ever got too overwhelming. The project leaders, Zoli and Orsi, were wonderful and really helpful throughout. It seemed like we had entered at a point where there personal lives were quite hectic and this may have caused tensions and affected their work sometimes (we were a very very small team) but all in all, they are wonderful, positive people and it was a joy to be there with them. I learn a lot about the inner workings of NGOs and am currently freelancing for an environmental charity in London.

EVS is such a great way to meet and work with like-minded people in a place you may have never thought you would visit before. Being British, I think it's very easy to forgot the fact that we are European citizens and think of mainland Europe as 'other' to the UK. Having volunteered in a highly disadvantaged area of Hungary for 8 months with 4 other volunteers from Spain, Portugal and Romania, I feel so much more strongly connected to Europe and feel very lucky to have the freedom to move around this land. London can be a hard place to meet and connect with people, and to sustain long term friendships. Having done EVS, I feel that I have gained a network of friends all over Europe who I have made a genuine connection with, and who I know I will see again in the future.