Every year it is great to meet up with many Concordia volunteers during the annual Post Season Event: the atmosphere is always extremely friendly and I do enjoy meeting new friends and catching up with old ones. This year there were 20 of us, 3 Concordia staff members and 17 volunteers, and we spent the weekend between volunteering in the local area, games, drinks and cultural activities.

On Friday evening, we had an abundant and delicious meal prepared by Fiona with the help of the volunteers and, following the consolidated tradition of all Concordia’s events, we played a few silly games and then had a few drinks and time to chat.

On Saturday, we woke up to a grey and rainy day…not the best thing to have when you are supposed to do some outdoor volunteering. However, our group wasn’t discouraged at all and managed to work hard and cheerfully for the Moulsecoomb Forest Garden and Wildlife Project. This project is a collection of allotments which was converted in 1994 into an environmental project for the benefit of the local community. The work consisted of building a path and at the end of the day we were very pleased to see the big difference our efforts made. 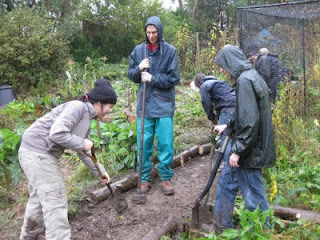 (In the picture: working at the Moulsecoombe Forest Garden) 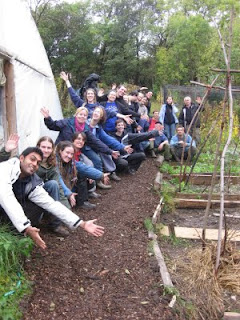 (In the picture: our brand new path!!)

We headed back to the accommodation in the late afternoon, had a warm shower, a hot meal and then ready to go out into town to enjoy the Brighton White Night, with lots of music events and clubs open until late at night. A large part of the group ended up in an 80’s and 90’s revival disco, which had everybody dancing until 3 am.

On Sunday we had the great opportunity to meet a group of 11 volunteers from the UK and Barhain in the Middle East who are currently participating in an exchange programme through VSO called GLOBAL EXCHANGE and whom we invited to spend a morning with us. It was great to hear about their experience and Concordia volunteers offered in exchange a drama performance of the highest quality which had as the theme “Volunteering with Concordia!”. It was absolutely great and hilarious! I don’t remember laughing that much in ages… :) 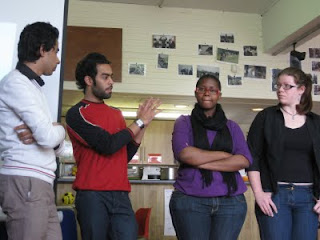 (In the picture above : group from Barhain giving a presentation) 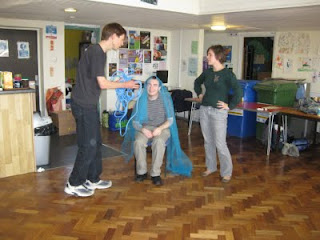 (in the picture:...one of our great performances!)

So, 3 days went really fast and we had fantastic time together. I would like to thank all the volunteers and staff who attended and helped with the running of the event, with a special thanks to Helen B and Helen P for arranging the volunteer work and the driving.

Posted by Concordia Volunteers at 2:32 PM No comments: 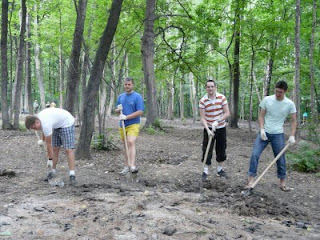 (In the picture: the volunteers at work!)

Moscow Backwoods is a two-week, environmental project based in Bitsevsky Forest, a Natural Historical park located at the South-western edge of Moscow. This once in a lifetime experience provided an opportunity to better understand conservation and Russian culture. The ability to live with and be shown around Moscow by Muscovites helped the group to gain an insight that we would not have gained had we visited as tourists. Despite it only being a short-term project, I believe that Moscow Backwoods was an excellent life experience.

I have to admit to having some apprehensions before going to Moscow, which were primarily caused by what I had seen on television. So after arriving at the Park, late Thursday evening, after having got lost on the Metro during rush hour (thankfully a female attendant acted out where I should go in front of a crowd of people) I was starting to wonder what I had gotten myself into. However, all my worries disappeared after the warm welcome I received from the people of the Park and by the rest of the group.

During the project we stayed in the gym of a local school that was one stop by metro away from the park. The accommodation was more than adequate as we slept on gym mats and had the use of a shower and warm running water. The volunteers of the camp prepared the food with two people taking it in turn each day as part of the cooking team. This was a great idea as it gave us the chance to experience the national dishes of each other’s countries.

We arrived at the park at 9 a.m. each day to start our conservation work. On the first day we played various games to help get to each other better. The work took place at various locations around the 18 square kilometres of territory that the forest covers. Our main task was to deal with clearing the forest of both litter and areas that had been damaged by fires which are prohibited within the park. Other work was centred around the main administration buildings of the park. This included maintenance on a special nature trail for blind people and helping to design and decorate an open-air classroom. My personal favourite was helping in the planning and execution of the Bicycle rate that is organised every year in the forest for members of the local community. During the two weeks we also had the opportunity to work in another park within Moscow and to visit many others. This gave us all a great overview of the different environmental work that is being carried out in Moscow in order to preserve the city’s natural habitats.

One of the best parts of the project was the large number of excursions that had been organised. There was very little that was not covered, with many tours of the city and visits including the ballet, Moscow Zoo and a local monastery. This was fantastic as it allowed us to see the different elements of Moscow life and experience a bit of what the city has to offer. 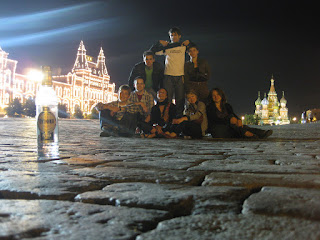 (In the picture: Graham with the rest of the group during a night out in Moscow)
When I decided to go to Moscow, probably the last thing that I expected to be doing was to be giving a television interview to Channel 1 Russia, but it happened. The previous day we had been told that a camera crew from a local channel would be waking us up the following morning, as they wanted to film the project and the daily life of us volunteers. This was a big surprise and a very weird experience trying to act normally and not look at the cameras. A few days later we had to do the same thing all over again as the main television channel in Russia came to film us for the day. This trend continued over the two weeks and three television and two newspaper interviews later, I can safely say that we became well accustomed to life in the media.

Despite visiting some of the best sites in Moscow and being on national television, it was often the smaller activities and the free time spent at the school or the park that provided the highlights of the camp. One such highlight was ‘Moscow Families’, where the group split up to spend the evening with a family from Moscow. This was great as it allowed us to meet other people from the Moscow area and get a taste of home life in the Russian capital. 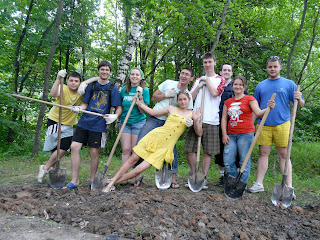 (In the picture: Graham and the group of volunteers)

What truly made the time special was the effort that the Russian host volunteers and theemployees of the park put into welcoming the foreign volunteers. I believe that this was the key factor to the success of the camp as it allowed the group to become great friends in such a short period of time. Their enthusiasm for the project and their willingness to help out with translation and problems faced by the foreigners of the group was incredible. This invaluable contribution to the experience of the international volunteers cannot be overstated.

The project was a very rewarding and authentic experience that went way beyond the work at the park. It allowed the group to make a difference and help the local community. I would recommend the project to anyone.

Read here more information about Russia >>
See all the pictures from our volunteers in Russia >>
Posted by Concordia Volunteers at 4:23 PM No comments: