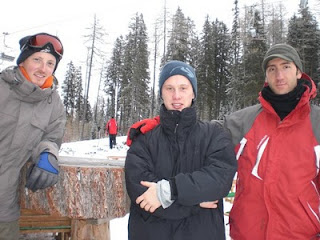 Back in Klagenfurt after my mid-term meeting in Innsbruck, it seems hard to believe that I'm already halfway through my EVS. However the six month mark seems like a good time to stop and take stock of what has happened so far.

After a slow start I've settled into my project and now have plenty to occupy me. I work for the youth department of the regional government, which is responsible for coordinating the various strands of the Youth In Action programme on a local level - not just hosting or sending EVS volunteers but also helping to organise youth initiatives and democracy projects. They also run several of their own initiatives outside of this, such as debating and music contests. I'm mainly involved in promoting and contributing to Youth In Action, but my host organisation has also taken care to give me an insight into a wide range of work areas, as well as giving me the opportunity to run my own project - a youth exchange based on the events of the 10th of October 1920, which was an important date for the region. After the first world war, Carinthia was invaded by the forces of what would later become Yugoslavia who wished to absorb the Slovenian speaking minority living in the south of the province into their territories. The Carinthians mounted a defence, but it was only when the League of Nations stepped in that the conflict was resolved through a referendum, whereby the Slovenian-speaking areas would be able to choose whether to remain part of Austria or to be united with the rest of Slovenia and the other Balkan countries. On October 10th 1920 they voted to stay with Austria, and as a result this display of unity is commemorated locally every year.

Politically, however, this is still a sensitive topic, as tensions still persist between the Slovenian and German speaking communities. The situation is not helped by the fact that the current ruling party in the regional government is very conservative - even right-wing - in outlook. This is after all the very region where controversial politician Jörg Haider was elected to power. However it has been completely fascinating to get an insight into the political and social landscape and to be offered the opportunity to make a difference by encouraging young people to think critically about themes such as democracy, minorities and social inclusion. Personally also it should be an exciting challenge, as I have next to no experience of organising events of this kind! 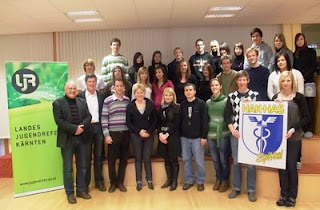 All that is still in the pipeline, but even now I can look back and see how much I have learned. Although I already knew some German before I came out here, I am already speaking far more fluently than when I arrived and have made a similar improvement in terms of my listening skills too. I've been put into (and coped with!) a number of challenging situations - from spending a morning entertaining 100 ten-year-olds to giving speeches in German at EVS publicity events in front of live audiences. I've made friends from all over the world and travelled to so many interesting places. In short, I've already gained so much from my time in Austria so far, and am excited to see what else is in store!
Posted by Concordia Volunteers at 3:16 PM 1 comment: